Is there anything people do not know about Sophia Loren? A diva to the bone, both for her biography, which resembles the plot of one of the films she starred in, and for her brilliant film career full of recognitions, up to her private life as the wife of producer Carlo Ponti, mother of the orchestra director Carlo Ponti Jr and the director Edoardo, as well as the object of desire of colleagues and generations of fans.

After living a childhood of poverty and hardship, at the age of 15 Sophia was on the Miss Italy catwalk; it took her ten years to become the queen of the international red carpets without ever giving up her own style and leaving her mark, not only on the world of Cinema (winning an Oscar for her part in "La Ciociara" and receiving the special honorary Oscar for her extraordinary career and a nomination for her role in "Una Domenica Particolare" (A Special Sunday), plus many other prizes), but also on the worlds of style, fashion and gossip.

We can therefore speak of an icon of style, and certainly she is a Curvy icon. One meter and sixty-four centimeters tall, she has always towered above her colleagues Gina Lollobrigida, Elizabeth Taylor and Claudia Cardinale, and she has worn her generous breasts and generous hips with pride and class, building her own personal signature of fashion around her body with the help of some famous names in fashion design.

Let's start from the breasts; this photo is famous and in one fell swoop explains that dressing tastefully with femininity and charm is an art that comes from within, and then has to be combined with the right mind: In 1957 Paramount organized an exclusive party to officially present Sophia in Los Angeles, and at our beautiful and very Italian diva's table, her "rival", the actress Jane Mansfield herself, came to sit down. Sophia's gaze not only says everything about the sensational entrance of Ms Mansfield at the table of honour to greet and be photographed, but the two cleavages, the necklines, reveal much more. The neckline of Ms Mansfield's dress is a remarkable malfunctioning of a celebrity's wardrobe as the fabric does not hold and shows decidedly too much, while Sophia is clamorously stylish in her silk dress with a halter neckline, that is, a hint of a heart-shaped bodice with glittering shoulder straps that cross behind her neck. 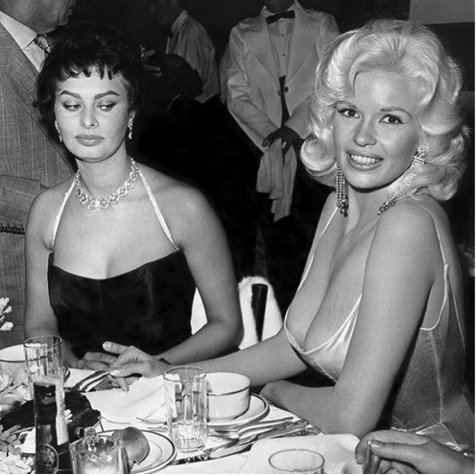 The décolleté has always been Sophia's strong point, but also her skilful use of colours is extraordinary: her favourite colour has always been red and here, we can see two examples of a variation after many years, keeping up with fashion but always with very clear ideas of her own. In the outfit on the left, the straps that end with two bows play down the theatrical effect of the intense red velvet, combined with the fur stole and the diamond necklace: it is 1957, the year of Sophia's marriage to Carlo Ponti in Mexico, since he had not yet managed to get an annulment of his first marriage because in Italy there was no law allowing divorce. In the photo on the right, the red is a coral-red, the round neckline and the tight armhole with the brooch are, however, a way of focusing on the low neckline, but taking advantage of the long neck to cover it completely, and making a perfect flare fall from the waist. It was 1962, Sophia was in her sumptuous villa of Marino, and it was the year of Ponti's divorce from his ex-wife; Sophia and Carlo were to get married in Italy in 1966. 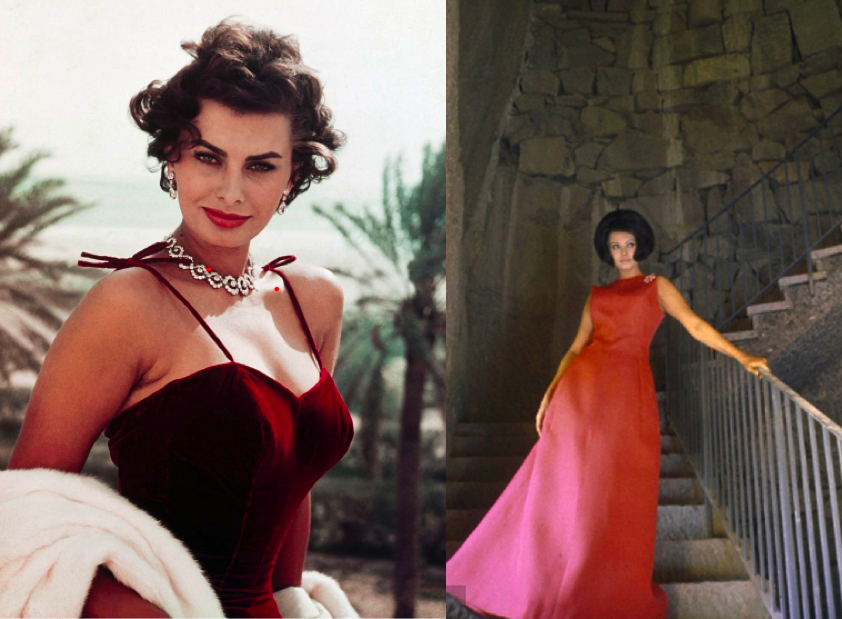 Lace, velvets, ruffles and necklines would always be part of Sophia's outfits, along with the ever-present valuable eye-catching jewels: Legend has it that she would wear nothing but real ones, even on the set. Magnificent sets of pearls, semi-precious stones and diamonds, chokers, oversized earrings.However, let’s get to the present day because, not even on one single day for 70 years has Sophia given up having her say in terms of style: both on and off the set

For 13 years, Muse and testimonial for Valentino, in 1991 she received an honorary Oscar for her extraordinary Career from the hands of Gregory Peck, dressed in a sumptuous black gown created by the great stylist and her fervent friend, with a sweetheart neckline and very thin straps, a chiffon stole draped over her straight and regal shoulders even though at the time Sophia was emotionally quite overcome.Hanging from her earlobes, chandelier earrings of sapphires and diamonds lit up the total black of her outfit. pictures from the Valentino Garavani Museum 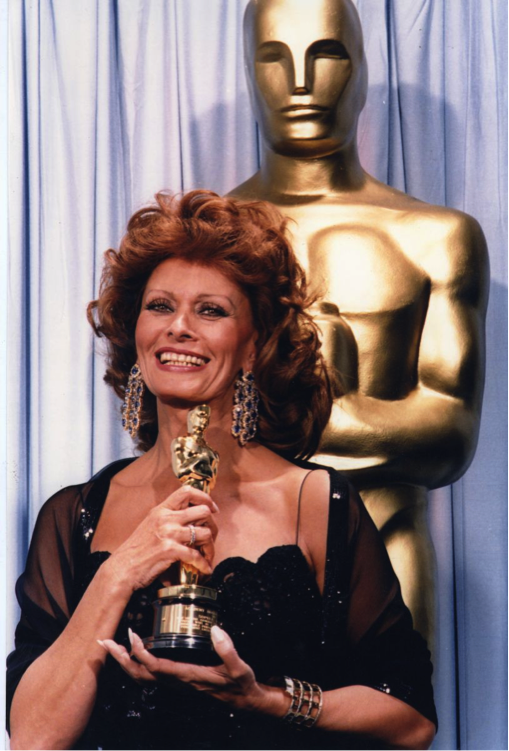 In 1993 came her divorce from the maison with the V, and the beginning of her association with King Giorgio Armani, of which this picture summarizes the alchemy very well. The red colour is tinged with nuances, it is combined with other shades, Sophia with Armani is more "daring" even if she is in the midst of her sixth decade, which she lives to the fullest and in absolute self-confidence. 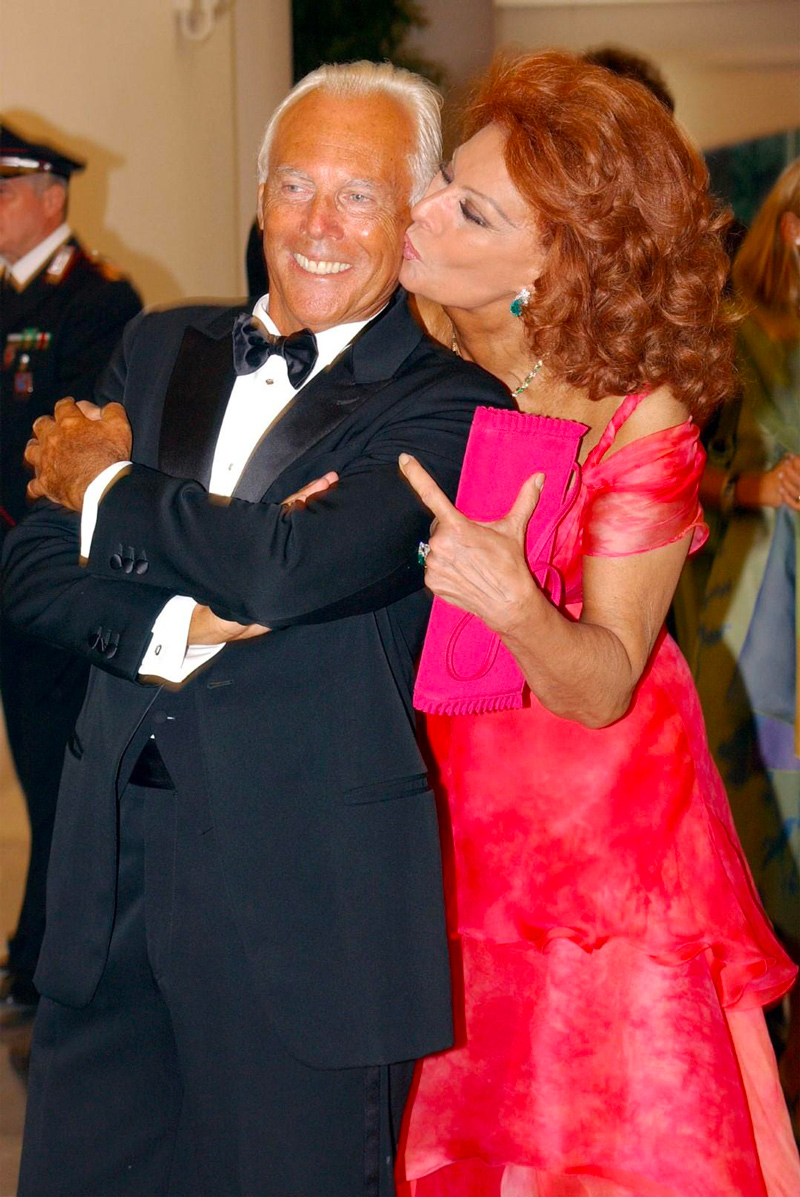 The style with which Sophia lives the years of her full maturity also derives from the irony with which she has always faced her role as an icon of style. We end with two outfits used on the set in order to understand how little they differ from the way in which Sophia Loren has always interpreted elegance and fashion. The scene is taken from the 1994 movie Prèt à Porter by Robert Altman, where the couple Loren-Mastroianni is together on the screen for the last time, and where she plays the widow of the president of the Paris Chamber of Fashion, the prime suspect for the murder of her husband. Sofia's character hates her late husband and the hypocrisy of her mourning is scenically represented by the black color of her dress, lit up by the wide-brimmed hat and stole of a flaming red color. 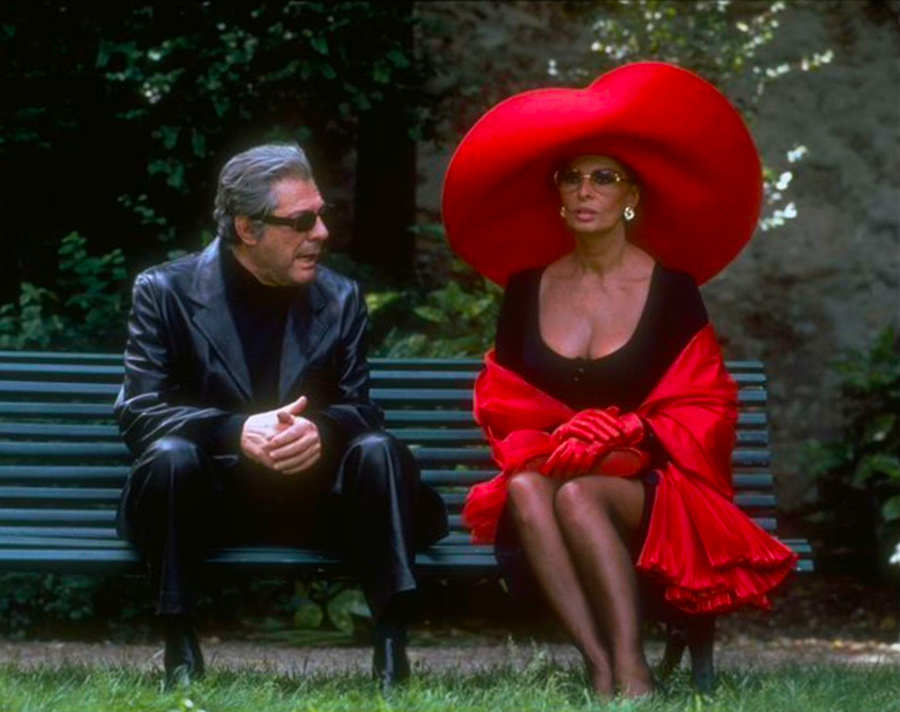 And finally Nine, where Sophia Loren not only accepts being the mother of the leading character, Daniel Day Lewis, in the role of Guido Contini, a director in an artistic crisis, but she sings "Guarda la luna" (“Look at the Moon”) as well, in the midst of a thousand candles, enveloped in a black dress with a blouse made of chiffon and a scarf around her neck. It is the year 2009, she is 75 years old, but one can hardly not be enchanted by the grace with which she wears the clothes, the security with which she does so and by the magic that she continues to release on the screen. 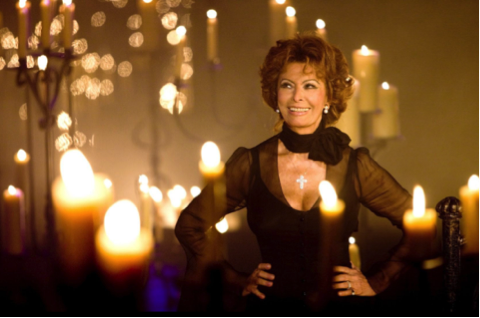